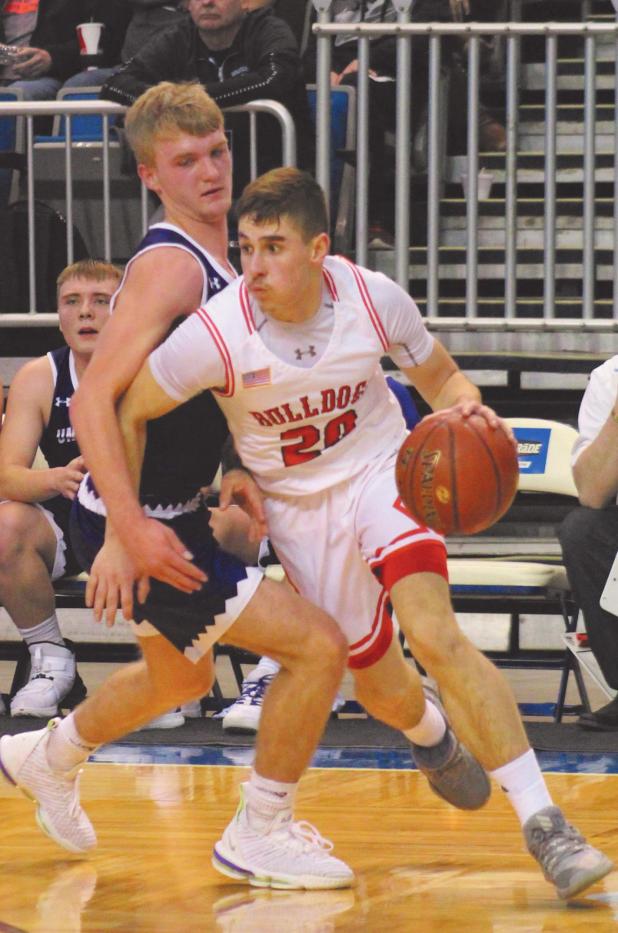 Senior for the Bulldogs #20 Jaron Reis drives to the bucket for two as the Bulldogs went up against Underwood in the first round of play. photo I Jill M. Friesz

The Flasher Bulldogs kicked off the Region 5 Tournament Monday, March 9, up against the Underwood Comets, in the firstround of play in the Bismarck Event Center.

The Bulldogs came out cold and allowed Underwood to get an early lead in the game. Both teams were fighting for the opportunity to keep their season going and to advance in the tournament, but the Bulldogs weren’t about to give up.

The scoreboard was within two or three points for each team throughout the game, creating a fun atmosphere for the fans.

Senior Laredo Werner shot and made it count four times from the three-point line to help the Bulldogs when they needed it. “Every time I shot I just kept thinking, ‘I hope it goes it!’ Werner said with a smirk. As a senior, this was an important game. “This win means we can continue and keep playing,” he added.

Head Coach Brian Nieuwsma was proud of all of his players, but commended Werner on shooting, “He made a lot of big plays for us! I’m proud of everyone on our team. They fought and fought!”

One of the biggest plays of the night came from Senior Steven Schmid with only 13 seconds left on the clock. With the teams tied at 50, “We had a play drawn up for Jaron Reis to get the best opportunity. He got double teamed, passed it off to me, I set my feet and shot,” Schmid recalled. He made the shot to give the Bulldogs the 52-50 advantage.

With ten second left, the Comets got the ball, but were shut down by Sophomore Jace Friesz.

Excited with the first-round victory, the Bulldogs know they can’t celebrate for too long, because round two of play was the next day.

The bracket had the Bulldogs going up against another District 9 team, the Standing Rock Warriors Tuesday night.

“We know we have to be prepared to take on Standing Rock,” said Schmid. None of us are ready for the season to end, and we are all hoping to be able to take on Shiloh in the championship game Thursday night,” he added.

Print deadlines did not allow us to report the score of the Flasher/ Standing Rock game. A full report of the final games of the tournament will be provided next week.