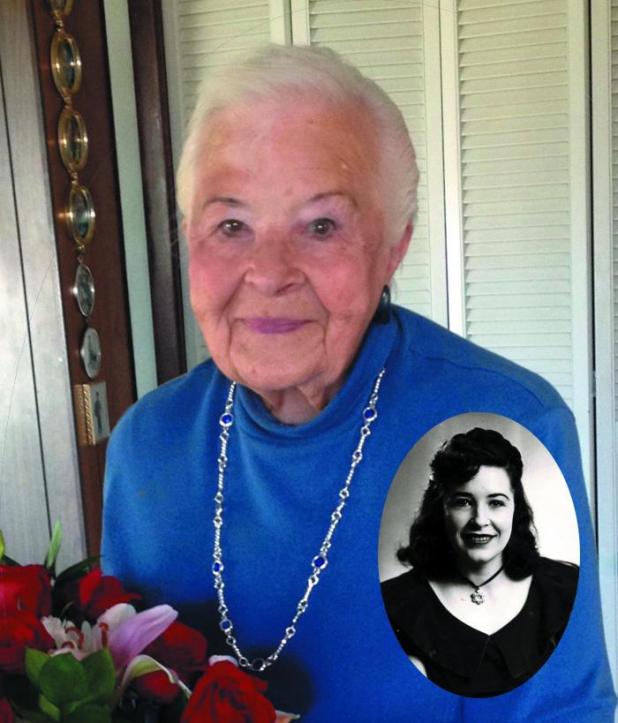 Betty Jeanne (Dresden) Ketterling, Hettinger, ND, age 93, passed into the next life on (Sunday May 3 , 2020) at Western Horizons Care Center, Hettinger, ND.  She was born on June 24, 1926 in the family farm home located five miles east of Hettinger, the sixth of the seven children of Lulu (Butts) and Arthur Dresden. When she was four her father died.  These were the years of the great depression so life was especially challenging.  She learned about hard work at an early age including milking cows, stoking a coal burning furnace, gardening, and housework.  She attended school in Haynes, graduating in 1944 as class salutatorian.  Her dream was to become a nurse but, given the times, this dream was never realized.
In the summer of 1944 and 1945 Betty took part in the war effort working in Tacoma, WA in a gun clip factory and then in a Base Exchange where she operated a soda fountain.  Her friendly smile and exceptional good looks made her very popular.  She liked to relate how she would put her tips in her anklets and at the end of the day her socks were overflowing with coins.
On December 31 ,1945 Betty attended a dance in Hettinger and ran into Richard Ketterling, newly discharged from his service in the Pacific during WWII.  He described her on their 70th   wedding anniversary as “the best-looking girl in Adam’s county”.  One dance led to many and marriage followed in May of 1946.  Their union brought three children into the world, Diana, Rhonda and Lance. She absolutely loved children, her own and everyone else’s. She was particularly fond of her grandchildren.
Her family teased her that her gravestone would be engraved with “Original Domestic Goddess”. She was an exceptional seamstress sewing everything from wedding gowns to coats to Barbie doll clothes and she upholstered furniture to boot.  Her baking abilities were well known by her friends in the community and you could count yourself as a lucky soul if you received some of her cinnamon or caramel rolls.  She also knew how to feed a family of five with a pound of hamburger and make it nutritious and flavorful.  Martha Stewart could have learned a few things from Betty. She shared her knowledge and made sure that each of her children was prepared for an independent life with cooking, baking, gardening and sewing skills.
Looking good was important to her all her life.  No going to town with curlers in her hair.  You had to have your hair combed, lipstick on and be wearing earrings that matched your outfit.  Even as she launched into her 90’s she was concerned about how she looked, whether what she wore “matched”, and if her jewelry looked good. She loved some bling! Weeks before her death she was still concerned about having lipstick on for “a little bit of color”.
Betty was a giver and she gave to her community in many ways. She served as a 4-H leader for 12 years, a cub scout leader, a Sunday school teacher, and an active fund raiser for the Community Concert Series. Her work outside of the home ranged from a dental assistant to retail (Rodman’s Pharmacy) to her final and favorite job which was the Director of Activities at the Hettinger Nursing home, now known as Western Horizons Care Center.  She essentially created and developed that position and held it for 25 years bringing smiles to many faces with her boundless creativity and compassion for others. She was teasingly called Crafty Ketterling.
A woman with vast amounts of patience and love she will be remembered by her family for these attributes as well as her willingness to embrace new experiences.  She loved to travel and meet new people. Put her on a plane and by the time it landed she was good friends with whomever was sitting next to her.  On her 80th birthday while in Seattle she thought nothing of hoping on a motorcycle with a great nephew and going for a spin.  She embraced life.
Betty’s faith was important to her and she was a lifelong member of the United Methodist Church. She practiced her faith in a quiet and nonobtrusive way and it was a comfort to her as her health failed.
She was preceded in death by all of her siblings; most recently by her dearly loved sister Bonnie Christmann with whom she shared a special bond and life long relationship.  They were referred to as “the B girls” and could often be found together canning, painting, wallpapering or enjoying a cup of tea and a game of Kings in the Corner. They loved to recount tales of their youth and when the two of them got to giggling it was hard not to laugh along for the sheer joy of it.
She will be greatly missed by her family and friends.  She is survived by her husband Richard, son Lance (Ellen) Hettinger, daughters Diana of Salmon, ID and Rhonda (David Wells) of Fargo, ND, four grandchildren : Lindsey Ketterling, Ketchum, ID, Mike Ketterling, Spokane, WA, LaDonna Hieb, San Antonio, TX, Jeanne Saadi of San Marcos TX , and many nephews and nieces. A memorial service will be held at the United Methodist Church this summer when larger gatherings are safe.  She always loved a party.
Memorials will go to the United Methodist Church and West River Health Foundation.
Condolences may be sent through our website at www.evansonjensenfuneralhome.com